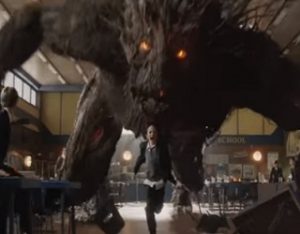 The upcoming drama film A Monster Calls, scheduled to hit theaters this fall, on October 14, follows a young boy who finds refuge in a fantasy world to deal with his mother’s illness and bullies at school.
The cast ensemble includes Lewis MacDougal, Felicity Jones, Toby Kebbel, Sigourney Weaver and Liam Neeson.
The track used in the trailer is the instrumental “Lower Your Eyelids To Die With The Sun” by M83.