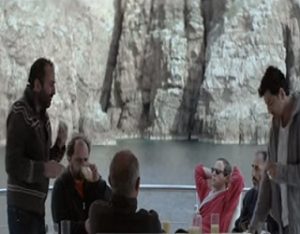 The Greek comedy Chevalier, which was nominated the Best Film at the 2015 London Film Festival, will be released in UK theaters this summer, on 22nd of July.
The movie follows six men who are on a luxury yacht and begin playing a game to nominate “the best man”.
Chevalier, directed by Athina Rachel Tsangari, stars Vangelis Mourikis, Nikos Orphanos, Yorgos Pirpassopoulos, Panos Koronis, Sakis Rouvas and Makis Papadimitriou.