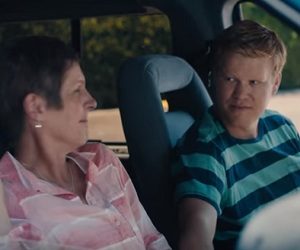 The upcoming comedy-drama film Other People, written and directed by Chris Kelly, follows a struggling comedy writer who leaves his
normal life to move back in Sacramento and be with his family, after finding out that his mother has little time left to live.
The movie, starring Jesse Plemons, Molly Shannon, Bradley Whitford, Maude Apatow, John Early, Zach Woods and others, is due out on
September 9.
The song playing in the trailer is “Nothing Takes The Place Of You”, by Shovels & Rope.

And each new day
Finds me so blue
Nothing, nothing
Takes the place of you

And oh, my darling
I’m so blue
Because nothing, oh, nothing
Takes the place of you..