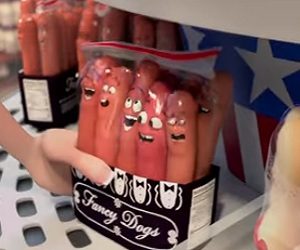 The 3D animated comedy film Sausage Party is centered around Frank the sausage and his friends, various groceries, who discover the truth about what happens to them after they are “chosen” by the supermarket’s clients.
Directed by Greg Tiernan and Conrad Vernon, the movie stars the voices of Seth Rogen, Jonah Hill, Kristen Wiig, Bill Hader, James Franco, Michael Cera, Danny McBride, Craig Robinson, Nick Kroll, Paul Rudd, David Krumholtz, Edward Norton and Salma Hayek.
The songs playing in the trailer are “Gone” by JR JR and “Wiggle” by Jason DeRulo feat. Snoop Dogg.
The release in US theaters is set for August 12.