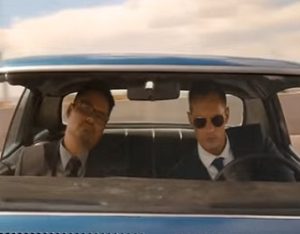 Bob and Terry are two corrupt police officers, set out to frame all the criminals they meet. The things don’t go, though, always according to the plan, as there are even more dangerous lawbreakers – this is the plot of the upcoming British comedy War on Everyone, directed by John Michael McDonagh.
The film stars Alexander Skarsgard and Michael Peña as the two cops, Tessa Thompson, Theo James, Caleb Landry Jones, Stephanie Sigman, Malcolm Barrett, and Paul Reiser.
The tracks used in the red band trailer are “Rhinestone Cowboy” by Glen Campbell and “Ante Up (Robin Hoodz Theory)” by M.O.P.

Tags: war on everyone