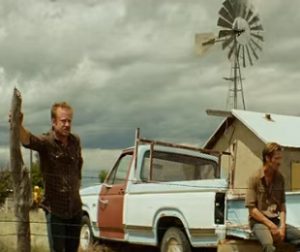 Chris Pine returns to the big screen in a heist crime film written by Taylor Sheridan and directed by David Mackenzie, titled Hell or High Water.
The upcoming American production, premiered at the 2016 Cannes Film Festival and set hit US theaters on August 12, follows a divorced dad and his ex-convict brother trying to save their family’s West Texas farm from foreclosure by robbing a bank.
The cast includes also Ben Foster, Jeff Bridges, Katy Mixon, Gil Birmingham, Dale Dickey, Kevin Rankin and Melanie Papalia.
The song used in the trailer is “Knockin’ On Heaven’s Door”, performed by the band Blakwall.