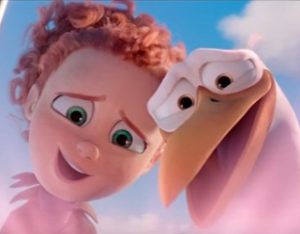 Storks is an upcoming American 3D animated comedy film following the adventures of Junior, a stork who accidentaly produces a baby and must fix the situation urgently, as storks do not deliver babies anymore, but packages for an Internet retailer.
Directed by Nicholas Stoller and Doug Sweetland, the animation stars the voices of Andy Samberg, Kelsey Grammer,
Anton Starkman, Jennifer Aniston, Katie Crown, Keegan-Michael Key, Ty Burrell and Jordan Peele.
Warner Bros. Pictures will release the movie this fall, on September 23.
Trailer Song: Fitz And The Tantrums – The Walker