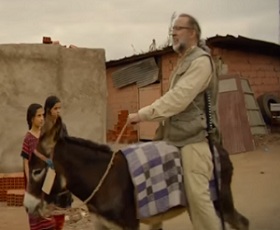 Nicolas Cage returns on the silver screen in the upcoming comedy Army of One, as Gary, a man with no purpose until the day he decides to set out on his own to Pakistan to find Osama Bin Laden.
Directed by Larry Charles, the film also stars Wendi McLendon-Covey, Denis O’Hare, Rainn Wilson, Russell Brand, Ken Marino, and Paul Scheer, and is scheduled to be released this fall, on November 4.