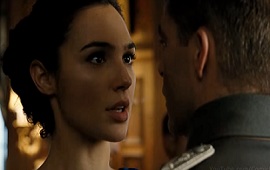 Gal Gadot is the Wonder Woman in the upcoming action adventure fantasy film of the same name, scheduled to be released next year, on June 2.
The movie, directed by Patty Jenkins, follows Diana Prince as she leaves her island home to explore the world and becomes one of the world’s greatest heroes in her journey.
The cast ensemble also includes Chris Pine, Robin Wright, Connie Nielsen, David Thewlis, Elena Anaya, Lucy Davis, Danny Huston, Ewen Bremner, Doutzen Kroes, Emily Carey.