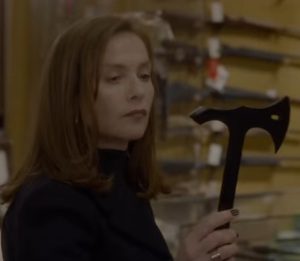 Isabelle Huppert is a businesswoman set out to stalk the man who attacked and raped her in her own home, in the psychological thriller Elle, directed by Paul Verhoeven.

With a script based on Philippe Djian’s novel “Oh…”, the film follows Michèle Leblanc, the manager of a successul video game company, whose life changes dramatically when an unknown assailant rapes her and she starts to track him down and seek revenge.

Elle premiered at the 2016 Cannes Film Festival, where it received a seven-minutes standing ovation. Subsequently, it got positive reviews from critics especially thanks to Verhoeven’s direction and Huppert’s performance, and it was selected as the French entry for the Best Foreign Language film at the 89th Academy Awards.