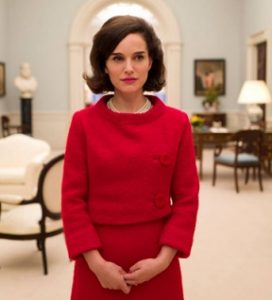 Natalie Portman is First Lady Jacqueline Kennedy in the upcoming biographical drama film Jackie, due out this winter.
Written by Noah Oppenheim and directed by Pablo Larraín, the movie centers around President John F. Kennedy’s wife as she deals with his assasination in 1963, to define his legacy. She also deals with grief and trauma to find the power to go on with her life and to comfort her children.
The cast includes in supporting roles Greta Gerwig, Max Casella, Peter Sarsgaard, Beth Grant, Richard E. Grant, Billy Crudup, and John Hurt.
Jackie premiered at this year’s Venice International Film Festival, where it was selected to compete for the Golden Lion, and it is scheduled to be released in US theaters on December 2.