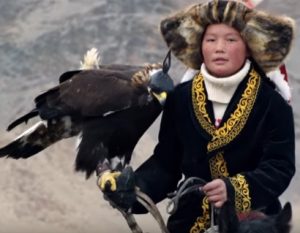 Sony Pictures has released a new trailer for the documentary The Eagle Huntress, following a 13-year-old girl who trains to become the first eagle huntress in twelve generation of her family.

Directed by Otto Bell and narrated by Daisy Ridley, the film, starring the young girl Aisholpan Nurgaiv, features how, on the edge of civilization, her mind is tested, her strength challenged, and how her spirit takes her on the adventure of her lifetime.

Described as “breathtaking”, “inspiring” and “extraordinary”, the documentary will air on December 16 in the UK.

The track used in the trailer is What We Started by Extreme Music.