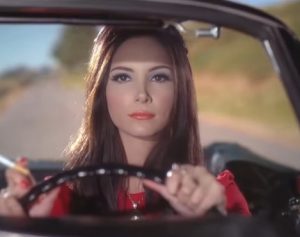 Samantha Robinson is The Love Witch in the comedy horror film of the same name, about a pathologically narcissistic young woman who uses spells and magic to make men fall in love with her.
Written and directed by Anna Biller, the movie embraces the 1960s look, but with a modern touch, as the characters use smartphones and modern cars. The cast includes also Laura Waddell, Gian Keys, Jeffrey Vincent Parise, Jared Sanford, Clive Ashborn, Elle Evans and others.
The Love Witch, shot to look like an old 1960s Technicolor film, premiered at this year’s International Film Festival Rotterdam.