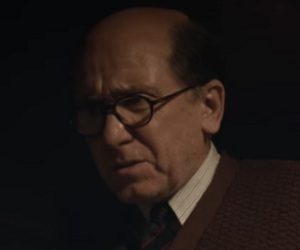 Tim Roth portrays serial killer John Christie in the new three-part BBC drama Rillington Place, about the Notting Hill murders committed in the 1940s and 50s and the subsequent miscarriage of justice, which led to the abolition of capital punishment in Britain in 1965.

For this purpose, the 54-year-old actor underwent an incredible makeover, consisting in a bald head cap and spectacles, to look like Christie, the cold blooded murderer, who strangled at least eight women, including his wife, in his London flat, at 10 Rilington Place and let his neighbor take the fall for the killings.

The series will premiere with its first episode on BBC One, on November 29, at 9pm.