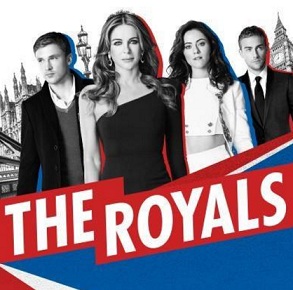 Fans of the drama series The Royals will get an early Christmas present this year: the third season, which will premiere on Sunday, December 4, at 10|9c on E!.
The TV show, set in modern day London and centering around a fictional Royal family, stars Elizabeth Hurley, Vincent Regan, William Moseley, Alexandra Park, Jake Maskall, Tom Austen, Andrew Bicknell, Victoria Ekanoye, Oliver Milburn, Merritt Patterson, Lydia Rose Bewley, Ukweli Roach, and others. In addition, Hurley’s son Damian will be joining the cast as Prince Hansel von Liechtenstein, and British actor Jules Knight, a real-life friend of Prince William and Kate Middleton, as the new Lord Chamberlain to the Queen of England.
The track playing in the trailer is “Bonkers” by Dizzee Rascal & Armand Van Helden.