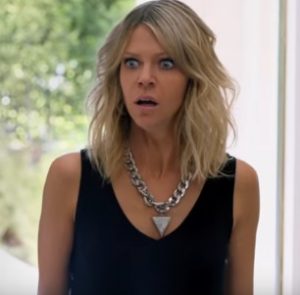 The Mick is a new comedy series scheduled to air on Fox, about a brash woman who must take care of her rich estranged sister’s three children, while she’s away due to fraud charges.

The new life she starts leading, with everything she has ever wished for at her feet, proves to be a challenge as she must transform the spoiled kids, ambitious 18-year-old Sabrina, arrogant 13-year-old Chip and 7-year-old adorable nerd Ben, into honest and hard-working members of society, which she isn’t. The TV show stars Kaitlin Olson in the leading role, as Mackenzie, aka “Mickey”, Sofia Black D’Elia, Thomas Barbusca, newcomer Jack Stanton, and others.

The Mick is slated to premiere on Sunday, January 1, 2017, following the NFL doubleheader. The series will then make its time period premiere with an all-new episode Tuesday, January 3.

The track used in the trailer is “Fancy (Explicit)”, by Iggy Azalea feat. Wiley & Charli XCX.