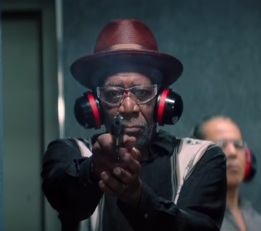 “If time is money, they’re going to make a killing”. They are three retirees played by Morgan Freeman, Michael Caine, and Alan Arkin, who hatch a plan to rob a bank in the upcoming comedy Going in Style.

The idea comes to one of them after their pension payments get frozen and after a successful bank heist committed by three armed and masked men, who walked off with 1.6 million dollars and didn’t get caught.

With a script by Theodore Melfi based on the 1979 film on the same name and score by Rob Simonsen, Going in Style is directed by Zach Braff and stars also Joey King, Matt Dillon, Ann-Margret, Kenan Thompson, John Ortiz, Christopher Lloyd, Peter Serafinowicz and Siobhan Fallon Hogan.

The release in theaters is scheduled for April 7, 2017.

The tracks used in the trailer are Highway to Hell by AC/DC and Don’t Owe You A Thang by Gary Clark Jr.