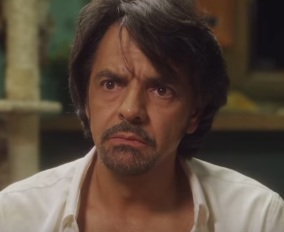 Eugenio Derbez – How To Be A Latin Lover

Derbez, who is Maximo in the film, moves in with his sister (played by Salma Hayek), after his marriage with an older and rich wife is ended by the latter.

The first trailer reveals that Maximo, who’s been dreaming of making a career from seducing older rich women, reunites with his sister, who doesn’t lose anuy chance to slap him. “I can’t believe what comes out of your mouth”, says Salma to her brother who will learn, eventually, the value of family.

The trailer also reveals that he tries to seduce Kristen Bell, but gets rejected. “I’m attracted to like really good-looking guys. Guys with like great faces and great bodies, who are muscular, and handsome, and younger. Much younger than you. And tall. A lot taller”, says Bell’s character after Maximo makes a “sexy” dance in front of her.

He also tries to teach his nephew how to use his skills of seduction to get back what he wants and tells the boy what ladies think: “He must be great in bed”. The kid’s answer is priceless: “I’m great in bed. I don’t pee or anything anymore”.