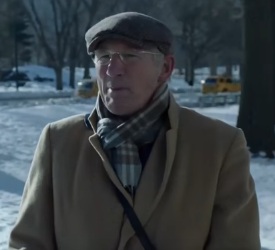 Richard Gere is a small time in the upcoming comedy drama Norman, originally titled Norman: The Moderate Rise and Tragic Fall of a New York Fixer.

He stars as Norman Oppenheimer in writer-director Joseph Cedar’s film, a New Yorker leading a lonely life and dreaming up financial schemes, who becomes friends with a young Israeli politician alone in the city, at a low point in his career. How Norman’s life changes when the politician becomes an influential leader, you can see in theaters, next spring.

The film had its world premiere at this year’s Telluride Film Festival and screened also as a Gala Presentation on September 12, in Toronto.

The wide release is slated for March 2017.