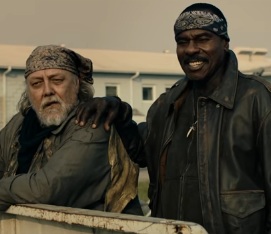 2017 will bring many highly-anticipated sequels and Stake Land II: The Stakelander is definitely one of them.

The trailer recently released for the sequel to 2010’s vampire-apocalypse film Stake Land, set several years after the events in Stake Land, features Connor Paolo reprising his role as Martin, who finds himself alone after his home of New Eden is destroyed by a revitalized Brotherhood and its new Vamp leader. Reunited with his mentor, Mister (who is a legendary vampire hunter), Martin gets ready to confront the Brotherhood and remove the threat it represents for the future of humanity.

Nick Damici, who wrote the screenplay for the upcoming sci-fi horror film, has also reprised his role as Mister, under the direction of Dan Berk and Robert Olsen, this time. Alongside Paolo and Damici, Laura Abramsen, Bonnie Dennison, AC Peterson, Steven Williams, and Kristina Hughes co-star.

The Stakelander is scheduled to be released in the US on February 7, 2017.