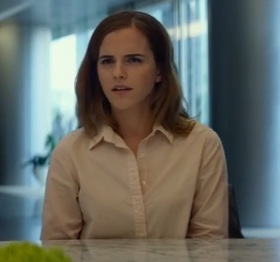 2017 is the year Emma Watson is Belle in the Beauty and the Beast, but also the year she learns incredible things at a powerful tech company called the Circle, in the upcoming science fiction thriller The Circle.

Based on Dave Eggers’s 2013 novel of the same name, the film is written and directed by James Ponsoldt and follows Mae Holland, a young woman who gets a job at The Circle and becomes involved with a mysterious man.

The trailer features Emma Watson passing the job interview and entering the new world, where everybody can realize their potential, and Tom Hanks, who plays the company’s manager, giving a speech in front of all employees, saying “At The Circle there isn’t a problem that we cannot solve. We can cure any disease. (…). We can finally realize our potential. (…) We care about everybody you care about. Because knowing is good, but knowing everything is better”.

The Circle, with music by Danny Elfman, stars also John Boyega, Karen Gillan, Patton Oswalt, Bill Paxton, Brando Marler, Elar Coltrane, and is scheduled to be released in the US theaters on April 28, 2017.