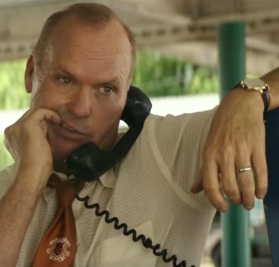 Michael Keaton is Ray Kroc in the upcoming biographical drama film The Founder, about how he, a salesman from Illinois, bought the 1950s burger operation of the brothers Mac and Dick McDonald and created a fast-food empire.

A new trailer has been released for the movie written by Robert Siegel and directed by John Lee, featuring the song “Glitter & Gold” by Barns Courtney. The video shows a part of a conversation where a man tells Keaton that he built an empire by owning the land and that he is not in the burger business, but in the real estate business. “I want to take the future, I want to win” – says Keaton, proving the ambition Kroc had in reaching his goal.

The Founder, starring also Laura Dern as Kroc’s wife, Ethel Fleming, John Carroll Lynch, Nick Offerman, Patrick Wilson, Wilbur Fitzgerald and Ric Reitz, was released in a limited release on December 7 and will have a wide release in the US on January 20, 2017.