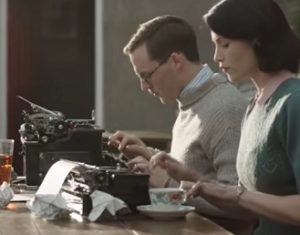 From director Lone Scherfig comes, in 2017, the romantic comedy film Their Finest, based on Lissa Evans’s 2009 novel Their Finest Hour and a Half.

Set in the early 1940s, the upcoming British feature tells the love story blooming between a young married woman working as a copywriter and a screenwriter while co-scripting a propaganda film about the evacuation of Allied troops from Dunkirk, France, to boost the national morale during the Blitz of London.

With soundtrack music by Rachel Portman, Finest Hours world premiered at the 2016 Toronto International Film Festival, in September, and was screened also at the BFI London Film Festival in October. The release in theaters is scheduled to March 24, 2017, in the US, and for April 20, 2017, in the UK.