Amazon Prime 2017 Series – Z: The Beginning of Everything (Trailer Song) 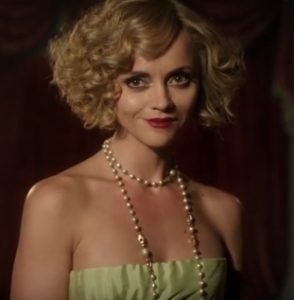 Z: The Beginning of Everything – Christina Ricci

Christina Ricci is Zelda Sayre Fitzgerald in the upcoming bio-series Z: The Beginning of Everything, scheduled to premiere this winter, on Amazon Prime.

The 36-year-old American actress plays F. Scott Fitzgerald’s wife, who became a novelist and an icon of modern feminism and who, ten years before her death, was admitted to a sanatorium in France, where she was diagnosed as a schizophrenic.

The new series, created by Dawn Prestwich and Nicole Yorkin, follows Zelda from the moment she met F. Scott Fitzgerald, in 1918, and tells her story by taking her out of her husband’s shadow. Their marriage, marked by wild drinking, infidelity and bitter recriminations, is also depicted in the series. The cast ensemble includes also David Hoflin as Fitzgerald, David Strathairn, Jordan Dean, Natalie Knepp, Corey Cott, Christina Bennet Lind, Jamie Anne Allman, Holly Curran and others.

The 10-episode first season will be available on January 27, 2017, exclusively on Amazon Prime.