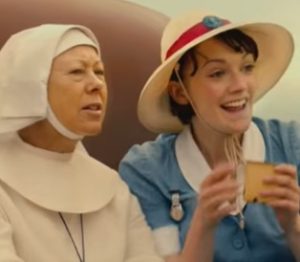 BBC One: Call the Midwife

BBC One has released a 30-second trailer for its Call the Midwife Christmas Special, airing on Christmas Day, at 8pm.

The shows follows a small working group of midwives and a cleric who travel to South Africa to work at a small mission hospital threatened with closure. There, the team members trying to save the clinic (Sister Julienne, Sister Winifred, Trixie, Nurse Crane, Barbara, Shelagh, Dr Turner, Fred and Tom Hereward) must deal with though challenges, and, as they make a difference to the lives of the locals, they see their own lives changed.

The song used in the trailer is Ben E. King’s single “Stand By Me”.