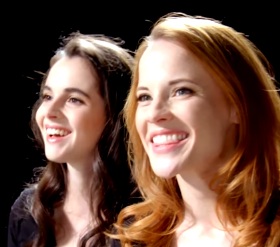 Switched at Birth returns on January 31st with its fifth and last season. The American TV channel Freeform has released a 60-second trailer for the upcoming season of the drama series following two teenage girls who discovered that they’ve been switched as newborns in the hospital.

Destiny hasn’t brought luck for both of them, though. While one of them, Bay Kennish, grew up in a rich family, with two parents and a brother, the other, Daphne Vasquez, with hearing impairment since an early age due to a case of meningitis, has been raised by a single mother in a working class neighborhood. Both families must face now the challenge to co-exist as parents and do what it’s best for their daughters.

The 10-episode farewell season, described as “the best one yet” by Katie Leclerc, who plays Daphne, will feature the drama’s milestone 100th episode and conclude with a special 90-minute series finale. “It’s not a show just for deaf people, it’s not a show about being deaf, it’s for everybody”, reveals the trailer.

The track used in the trailer is “Colours” by Mike Taylor.