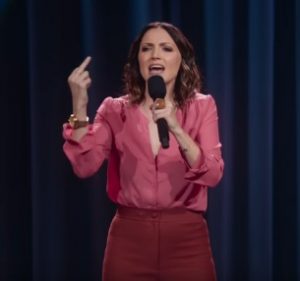 Netflix has released the trailer for the second original special of Jen Kirkman for the streaming service, titled “Just Keep Livin’?” and scheduled to premiere on Tuesday, January 3, 2017.

A follow-up to her first original comedy special, “I’m Gonna Die Alone (And I Feel Fine)”, “Just Keep Livin’?”, filmed at the Bowery Ballroom in New York City, sees the stand-up comedian approaching subject such as getting a tattoo at 41, people who won’t travel alone, male feminists and street harassment.

The promo features Jen revealing that one of her male friends yells “nice tits” to women and giving men some advice about how to express their delight in front of a pair of nice tits. “If you drive by a woman who has nice tits, roll up your window and smash your face against the glass “nice tits”. You can call a friend and go “nice tits, I see some nice tits”. Or, if you have the time, veer off the road, go into a field, get on your knees and let God know “Nice tits”, says Jen.