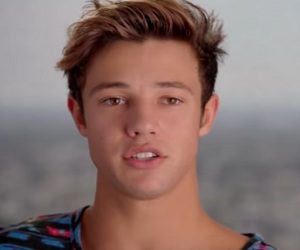 Netflix has released the trailer for its upcoming original docu-series Chasing Cameron, scheduled to launch globally on December 27.

The new TV show follows Cameron Dallas, a social media star and an entrepreneur eager to take his career to a new level, as wells as his close friends Blake Gray, Taylor Caniff, Willie Jones, Aaron Carpenter, and Trey Schafer, who form MAGCON (which stands for Meet and Greet Convention), on their first international tour.

The ten-part docu-series, produced by Magical Elves, explores the contrast between the public online profiles of these youngsters with thousands of fans, and their personal lives, providing viewers with a real image of the inside world of digital celebrity.

The trailer contains images from Cameron’s archive, displaying him five years ago, when he started out, on Instagram, continuing with images from the cities around the world he’s traveled to to meet his fans, with images of the other MAGCON boys, of the life on the road.

Among the topics approached in the series by Cameron there are his childhood, the start of his career, the lessons he’s learned so far, MAGCON, life on the road, and things that fans don’t really know, such as the pressure he feels.

The indie dance track used in the trailer is “I’m Here” by Puppet & Foria.