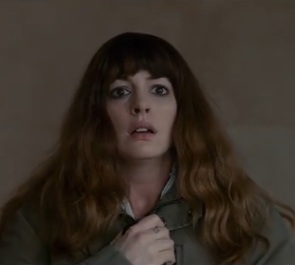 Anne Hathaway returns to the silver screen as Gloria, a woman who controls a gigantic monster, in the upcoming sci-fi thriller Colossal.

Written and directed by Nacho Vigalondo, the film follows Gloria as she leaves New York after breaking up with her boyfriend and moving back to her hometown, where she discovers that the giant creature trampling the city of Seul is connected to her. Alongside Hathaway Dan Stevens, Jason Sudeikis, Austin Stowell, and Tim Blake Nelson co-star.

Colossal had its world premiere at the Toronto International Film Festival and was screened at the Sundance Film Festival on January 20. The wide release is slated for April 7.