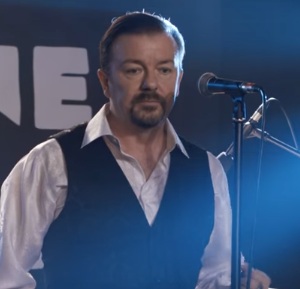 Ricky Gervais stars in a British mockumentary about David Brent, David Brent: Life on the Road, which follows Brent (the main character in the BBC comedy series The Office) chasing his dream of being a rock star.

Written and directed by Gervais himself, the film, set twelve years after “The Office”, revolves around Brent, who is now a travelling salesman willing to launch himself as a musician by self-financing a UK tour with his band, Foregone Conclusion.

The trailer features Gervais singing together with Doc Johnson the spoof reggae song “Equality Street” in front of a public that doesn’t seem delighted at all by their performance. The trailer features also Strauss’s “Waltz On The Beautiful Blue Danube”, performed by the Royal Philharmonic Orchestra.

David Brent: Life on the Road was released in the UK on August 19 and will launch globally on Netflix, on February 10.