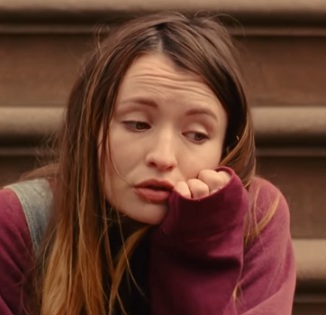 Golden Exits is a drama film written and directed by Alex Ross Peryy, depicting the unhappiness of two families from Brooklyn generated somehow by the arrival into their lives of a young foreign girl.

The teaser trailer released so far stars Emily Browning, the female lead, singing “New York Groove” (a song most famously performed by KISS) for about one minute. No other actor from the cast ensemble is featured, even though some of them, such as Adam Horovitz, Jason Schwartzman, Chloe Sevigny, and Analeigh Tipton, could have appeared.

Browning plays the role of Naomi, an Australian young woman in her 20s, who arrives to Brooklyn to assist Nick for the semester. Her only acquaintance in the city is a music producer named Buddy, who lives in the same neighborhood. The lives of both Nick and Buddy’s and of their families are turned upside down in the few months Naomi spends there.

Golden Exits had its world premiere on January 22, at the Sundance Film Festival, but there isn’t a release date set so far, as it doesn’t have a distributor yet.