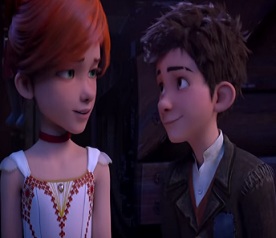 The animated musical fantasy film Ballerina will be released in the US theaters with a new title: Leap.

Co-directed by Eric Summer and Éric Warin, the film, set in 1879, follows a poor orphan girl who runs away from her orphanage and goes to Paris to pursue her dream of becoming a ballerina. After getting the chance to audition for the celebrated school of the Paris Opera Ballet, she uses all her energy and determination to improve every single day and to turn her dreams into reality.

The film was released in France, Canada and the UK in December 2016 and is scheduled to be released in the US on March 3, 2017.

The soundtrack album, featuring both the film’s original score and songs from other artists used in the film, was released internationally on December 12.

The track used in the trailer is Hold on by Extreme Music.