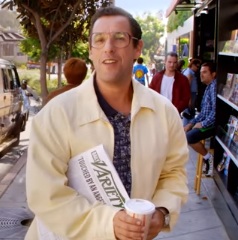 Adam Sandler falls in love with Jennifer Hudson. Not in real life, though, but in the upcoming upcoming comedy film Sandy Wexler, about a talent manager who has a crush for his newest client.

Set in 1994 Los Angeles, the movie follows Wexler, played by Sandler, as he diligently represents a group of eccentric clients on the fringes of show business until one day, when he discovers at an amusement park the talented singer Courtney Clarke, played by Hudson. Written by Sandler in collaboration with Dan Bulla and Paul Sado, and directed by Steven Brill, Sandy Wexler stars also Kevin James, Terry Crews, Colin Quinn, Rob Schneider, Lamorne Morris, Nick Swardson, and Arsenio Hall, and is scheduled to be released on Netflix, on April 14.

The streaming service has released a teaser trailer, featuring Jennifer Hudson posing during a photoshoot at Tower Records, and Sandler being kicked out from a set by a security guard and him answering he’s in the business. In another scene, he holds a cup of coffee and a Variety newspaper.

The track playing in the background is the 1994 hit “Tootsee Roll”, performed by the American Miami bass and hip hop group 69 Boyz.