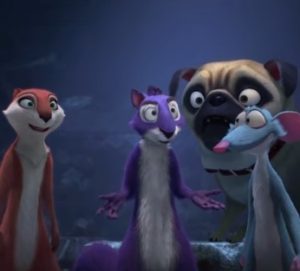 “This summer you don’t have to be big to be a big hero” – this is the message the trailer for the upcoming comedy The Nut Job 2: Nutty by Nature carries.

The sequel to the 2014 The Nut Job, the animation film follows Surly the squirrel and his friends as they unite their forces to prevent Oakton City’s mayor from going through with his plan to destroy Liberty Park and build a dangerous amusement park instead.

Directed by Cal Brunker, The Nut Job 2 features the voices of Will Arnett as Surly, Katherine Heigl as Andie, a red squirrel and Surly’s best friend, Gabriel Iglesias as a groundhog, Jeff Dunham as a mole, Maya Rudolph as a pug, Jackie Chan as the territorial leader of a street mouse gang, Bobby Moynihan as the Mayor, Bobby Cannavale as the mayor’s pet French bulldog, and others.

The film is scheduled to hit the US theaters on August 18.

The song used in the trailer is “Do Something Crazy”, performed by Outasight feat. Cook Classics.