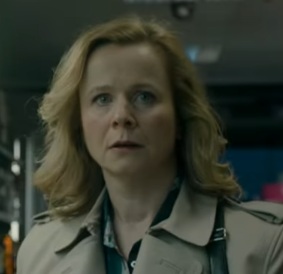 BBC has released the trailer for the upcoming psychological drama series Apple Tree Yard, scheduled to air on BBC One, on January 22, at 9pm.

Adapted from Amanda Coe’s novel of the same name, the four-part series follows Yvonne Carmichael, a married woman with two adult children, whose quite mundane life is turned upside down after a passionate affair with a mysterious man and a violent act, which brings on a Crown Court trial. With Emily Watson in the leading role, Apple Tree Yard stars also Ben Chaplin, Mark Bonnar, Rhashan Stone, Adeel Akhtar, Lydia Leonard and Frances Tomelty.

The trailer features Emily Watson saying “Before I met you I was a civilized woman. Civilized. Now I don’t even know what that means” and a few scenes in which she meets Chaplin, who plays the mysterious man she falls for.

“Fear makes animals of us all”, she also says in the trailer, that ends with a question: “What have I done?”.