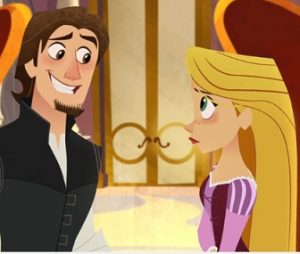 Rapunzel, Eugene, Pascal and Maximus are back. The four characters from Disney’s musical fantasy-comedy film Tangled will be the protagonists of a series whose action takes place between the 2010 theatrical feature and the 2012 short movie Tangled Ever After, which centered on the wedding of Rapunzel and Eugene “Flynn Rider” Fitzherbert.

Tangled: The Series will follow Rapunzel and her lover in new adventures, alongside chameleon Pascal and horse Maximus. The trailer reveals that the hair is back, which doesn’t make Rapunzel happy at all. Seeing that cutting it with scissors is impossible, she and her friends starts looking for alternatives.

Alan Menken, who wrote the score and songs for the original movie, and Glenn Slater have composed new songs for the series, which is scheduled to premiere on Disney Channel in March.