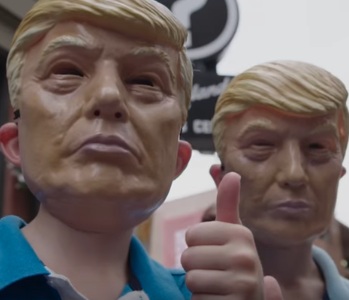 Showtime has released a teaser trailer for the upcoming documentary Trumped: Inside the Greatest Political Upset of All Time, scheduuled to air on Friday, February 3rd, at 9pm ET/PT.

The film follows the “impossible rise” of Donald Trump, from the primaries through the debates, to the election night results, featuring never-before-seen footage thanks to Mark Halperin, John Heilemann and Mark McKinnon, who had daily access to the presidential candidates from January 2016 to November 2016 and used the videos for the weekly Showtime documentary series The Circus.

Directed by Banks Tarver, Ted Bourne and Mary Robertson, and produced by Left/Right, the documentary film has been pieced together in record time in order to give viewers a behind the scenes look at the entire campaign year. So if you ask yourself if this contains many things that you have already seen, such as his ride down the escalator at Trump Tower to announce his candidacy, the mocking of John McCain, Megyn Kelly, and New York Times reporter Serge F. Kovaleski, the first time he promised to build the wall to stop Mexicans come to America, the answer is yes.