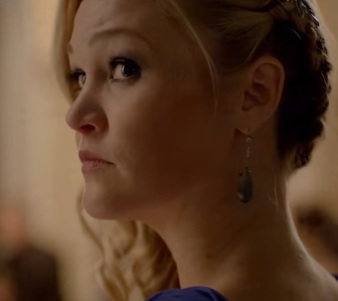 Sky Atlantic has released a teaser trailer for its upcoming original drama mini-series Riviera, about the wealthy  elites from the south of France and the backstage of their personal and professional lives.

The new TV show, written and directed by Neil Jordan, follows Georgina (Julia Stiles), the American wife of billionaire Constantine Clios, as she tries to find out the truth about his death, occurred in a yacht explosion a year after their marriage. Her endeavor, dragging her into a web of deceit and depravity, is marked by shocking discoveries about her husband’s business dealings.

The promo, launched with the message “Behind every great fortune there is a great crime.”, shows Julia’s character
kissing her husband, being involved in paintings auctions, smiling, but also tormented near a police car, and then
with a gun in her hand. “How blind do you have to be to not see what is right in front of you?”, she asks as the teaser comes to its end, with the onscreen line “Coming Soon”.

Riviera will air on Sky Atlantic in the U.K., Ireland and Italy later this year, as well as on Sky in Germany and Austria.