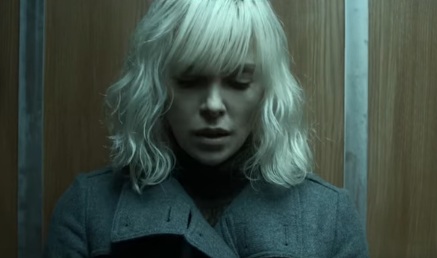 Charlize Theron is a deadly spy in the upcoming thriller Atomic Blonde, directed by David Leitch (director of John Wick) and scheduled to be released this summer.

The South African actress plays MI6 Agent Lorraine Broughton, a skilled intelligence operative sent to Berlin during the Cold War to investigate the murder of a fellow agent and recover a missing list of double agents. In her endeavor, she partners with embedded station chief David Percival (James McAvoy) to navigate her way through a deadly game of spies.

Two 15-second teaser trailers have been released so far, featuring a dramatic cover version of the 1983 hit “Blue Monday” by the English rock band New Order, announcing that the restricted trailer will come out on Friday, March 10.

In the first teaser, carrying the message “Fight. Kiss. Kill”, Charlize, sporting a chin-length blonde bob with bangs, is shown getting her gun ready in an elevator, beating a man, kissing a woman and putting down two police officers. In the second teaser, she is shown wearing sexy black underwear and fixing a wire on it. This teaser announces, as well, the launch of the restricted trailer, slated for March 10.