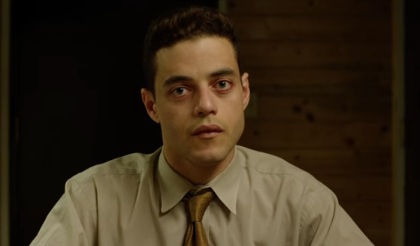 Emmy Award-winner Rami Malek, known for his role in the hit TV series Mr. Robot, makes his first features lead as a man in two bodies in the upcoming surreal mystery film Buster’s Mal Heart, slated to hit the US theaters on April 28.

The film, written and directed by Sarah Adina Smith, revolves around Jonah (Malek), a troubled mountain man who runs from the authorities and manages to survive the winter by breaking into empty vacation homes. Haunted by a dream of being lost at sea, he discovers that the dream is real and that he is, in fact, one man in two bodies.

The first trailer for the film, starring also Kate Lyn Sheil, Lance Barber, Toby Huss, Lin Shaye, DJ Qualls, and others, does not reveal too much of the story line, featuring scenes that raise questions and positive reviews made by critics, after its premiere. Malek’s character is shown getting a night job as a receptionist in a hotel, and trying to adjust while having recurring flashbacks of his wife and little daughter and of his experience on the sea, where he remained on a small boat, with no food.

The song used in the trailer is a cover of the African-American spiritual song “Go Tell It on the Mountain”, compiled by John Wesley Work, Jr., dating back to at least 1865.