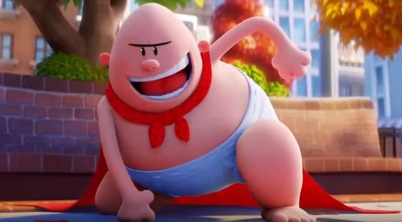 The trailer for the upcoming animated superhero comedy Captain Underpants, produced by DreamWorks Animation (the studio that brought you Shrek, Kungu Fu Panda, and Madagascar) and Scholastic Entertainment, has been released.

Based on Dav Pilkey’s children novel of the same name, the film follows two imaginative 10-year-old boys, George and Harold, who embark, together with their principal transformed in superhero Captain Underpants, on a mission to stop a mad scientist from destroying the world.

The song used in the trailer is “Delirious (Boneless)” by Steve Aoki ft. Kid Ink, from the 2014 album “Step Up: All In”.

Captain Underpants: The First Epic Movie was initially due out on March 10, but The Baby Boss took over its date, so it was postponed, with its new release date slated for June 2.