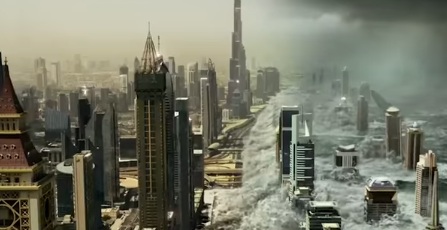 The film, marking the directorial debut of Dean Devlin, who served also as a co-writer, revolves around Jake (Gerard Butler), a satellite designer heading into space to prevent climate-controlling satellites from creating a storm of epic proportions that could destroy the whole world. In the meantime, on the Earth an assassination plot aiming at the president of the US unfolds.

The teasers show devastating weather, such as deadly twisters, giant waves, burning lava and a snowstorms that turns hot, unleash across India, Hong Kong, Dubai, and Moscow. “Tomorrow the world will be taken by storm” – is the message conveyed in the teaser, announcing that the trailer will be released tomorrow, March 8.

Geostorm is set to be released in theaters on October 20.