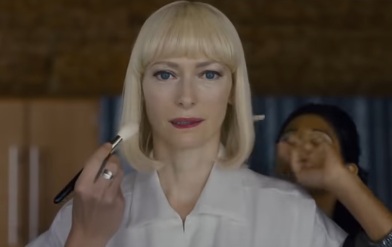 From the visionary director of Snowpiercer, Bong Joon-ho, comes a story about the bond between man and animal and the animal in all of us, set to launch on Netflix this summer.

The action-fantasy movie, co-written by Joon-Ho and Jon Ronson, follows a young girl named Mija, who lives in the deep woods of the Gangwon Province of South Korea and risks everything to save her best friend, a large creature named Okja, from being taken away by a powerful, multi-national company.

The streaming service has released a teaser trailer for the film, but it doesn’t reveal anything, featuring only Tilda Swinton’s character, with a blonde bob haircut with bangs, saying “I took nature and science and I synthesized them”. She is shown getting ready for a public appearance, where people in formal attire are waiting for her in silence, with phones and filming cameras. The promo also features South Korean actress Ahn Seo-hyun, who plays Mija, touching gently Okja, of which viewers can see only her big brown eyes.

The film, starring also Devon Bostick, Shirley Henderson, Choi Wookshik, Byun Heebong, Daniel Henshall, and Steven Yeun, will be released globally on June 28, on Netflix, and will also have a limited day and date theatrical release in the US.