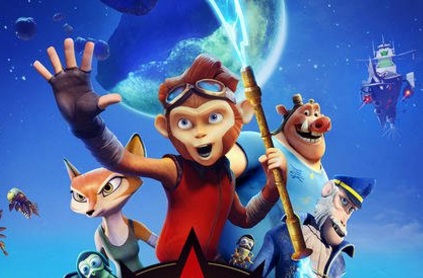 “Have you ever felt like you were destined for something more?” – is the question raised in the trailer for the upcoming animation comedy film Spark: A Space Tail.

Written by Doug Hadders and Robert Reece and directed by Aaron Woodley, the film follows teenage monkey Spark and his friends, Chunk and Vix, as they embark on the quest to take back the planet they live on, Bana. In the process, Spark discovers that he is the prince, having the seal of the royal family on his hand, and this motivates him even more to hatch a plan to take out Zhon, the power-mad general who, thirteen years ago seized control of the planet and tore it to pieces.

The trailer, released with the message “One team, one hero can save the galaxy”, reveals quite much of the storyline through several scenes, blending action with humour, so you’d better not watch it if you want to be surprised. The film, starring the voices of Jace Norman, Jessica Biel, Patrick Stewart, Hilary Swank, Susan Sarandon, Jason Deline and others, is scheduled to hit theaters this spring, on April 14.