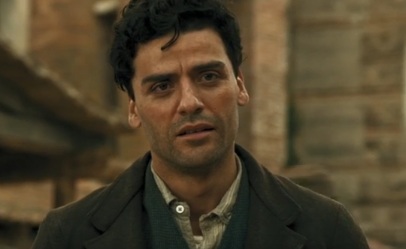 “Empires fall, love surives” – this is the message conveyed in the trailer for the upcoming drama film The Promise, scheduled to be released this fall.

Set during the last days of the Ottoman Empire, the film revolves around a love triangle between Ana, a beautiful and sophisticated young woman, Chris, an American journalist, and Michael, a brilliant medical student, who organises an escape operation during the Armenian genocide, when people are not safe anymore there. The trailer informs that the film is inspired by true events, but it doesn’t reveal much of the storyline. The cast includes Charlotte Le Bon, Christian Bale, Oscar Isaac in the leading role, Shohreh Aghdashloo, Angela Sarafyan, Jean Reno, Daniel Giminez Cacho, James Cromwell, and Marwan Kenzari.

The Promise had its world premiere last fall at Toronto Film Festival and is scheduled to be released on April 21.

The theme song is “Renascence” by Jo Blankenburg.