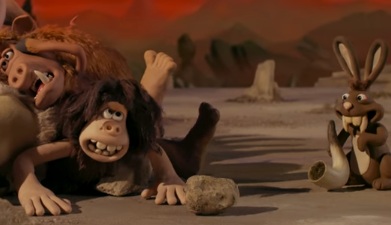 Early Man is an upcoming stop-motion prehistoric comedy film directed by Nick Park (Academy Award-winner for Wallace and Gromit: The Curse of the Were-Rabbit), about a caveman who who traces the world’s first game of football.

Set at the dawn of time, when the Earth was populated by strange prehistoric creatures and woolly mammoths, the film tells the story of how brave caveman Dug, along with sidekick Hognob, unites his tribe against the mighty Lord Nooth in a battle to beat them at their own game, resulting in becoming the very first game of European football.

The first trailer released for the film shows Dug and his tribe, that seem to be a hapless bunch, running away terrorized by a long-toothed bunny.