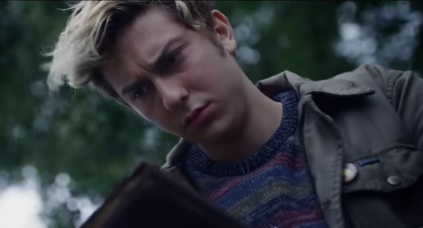 Netflix has released a teaser trailer for its upcoming original film Death Note, set to premiere on August 25.

Based on the international phenomenon manga written by Tsugumi Ohba and Takeshi Obata and directed by Adam Wingard, the film revolves around a high school student who finds a supernatural notebook that empowers him to decide who lives and who dies. More specifically, if the owner writes someone’s name down while picturing their face, he or she will die. Soon, the teenager begins to use his godlike skills to end the life of those he deems unworthy of life.

The short promo features the notebook, with the writing “Death Note” on its cover, falling from the sky in a sort of park, just a few meters from the protagonist. At home, he opens it and, after learning that “the human whose name is written in this note shall die.”, writes someone’s name. The teaser continues with three young men jumping off a tall building, another man, chased by a police car, hitting a fence, and another man almost falling from a Ferris wheel, and ends with a malevolent voice asking the owner of the Death Note “Shall we begin?”.