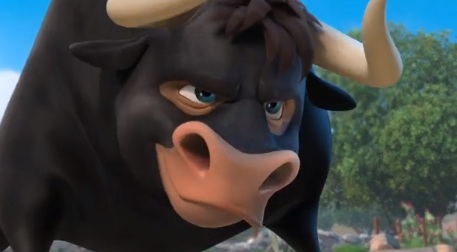 “It seems like from the moment you’re born, people think they’ve got you all figured out. Based on how you look, how you talk, where you’re from, but it’s not that simple. Specially when it comes to me.” – this is how the trailer for the upcoming 3D computer animated comedy film Ferdinand, produced by Blue Sky Studios and 20th Century Fox Animation, begins.

The film, based on Munro Leaf’s children’s book “The Story of Ferdinand” and directed by Carlos Saldanha, revolves around Ferdinand, a bull who describes himself as “a little bit more complex” given his interests and passions; for example, he would rather smell flowers than fight in bullfights. However, he finds himself in the middle of the bull ring after being taken away from his town and must deal with new challenges.

The trailer, released with the message that “he inspired the world by being himself”, features some of the funny scenes, such as the moment Ferdinand enters a China shop and, holding his breath and sucking in his stomach, walks among the delicate marble objects with “baby steps”. He manages to avoid breaking any of them thanks to his amazing skills, but when an old lady dusts his snout, he sneezes and creates a chaos. Another scene shows Ferdinand confessing he’s not a fighting bull and a hedgehog “instructing” him that he doesn’t have to be a fighting bull, but just look like one. Viewers can also see Ferdinand “training” with the help of a goat, who asks him to smash a barrell to pieces. “With my head?”, comes Ferdinand’s question. “What else you’re gonna hit it with?”, asks his new friend. Ferdinand then sets out to the barrel, but a bunny shows up and he, trying to avoid him, stumbles, making a fool of himself. Seeing the bunny lying out cold, he begins to resuscitate him and when the bunny awakes, he apologizes for having almost killed him.

The film, starring the voices of John Cena (as Ferdinand), Gabriel Iglesias, Kate McKinnon, Mark Valley, Paul Feig,
Carlos Saldaña, and Trevor Noah, is set to be released in theaters on December 15.

The song used in the trailer is the single “Castle On The hill” by Ed Sheeran, from his 2017 album “Castle on the Hill”.