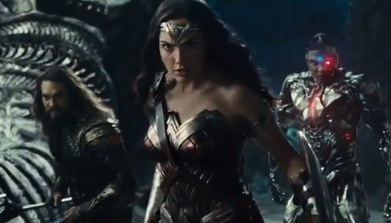 The trailer for the upcoming Justice League, due out on November 17, has been released.

The superhero film, directed by Zack Snyder, takes place a few months after the events of Batman vs. Superman and follows Bruce Wayne/Batman (played by Ben Affleck) as he faces an even greater threat, with the help of his new ally, Diana Prince/Wonder Woman (played by Gal Gadot). The two superheroes gather a team of metahumans (the Aquaman , the Flash, and Cyborg) to twhart the evil plans of Steppenwolf and his army of Parademons, who are on the hunt for three Mother Boxes on Earth.

The trailer starts with Bruce Wayne and Diana Prince talking about “an attack coming from far away” which “is already here”, and introduces the metahumans: Arthur Curry, the Aquaman (played by Jason Momoa), Victor Stone, the Cyborg (played by Ray Fisher), and Barry Allen, the Flash (played by Ezra Miller). “You said the age of heroes would never come again”.

“It has to” – is the exchange of lines between Wayne and Diana.

The trailer, carrying the message “Justice for all”, does not lack comic scenes, such as Wayne’s response to Allen, when the latter asks him what his superpowers are: “I’m rich”.

The songs used in the trailer are “Hardest Button To Button” by the legendary The White Stripes, from their 2003 album “Elephant”, and a cover version of the iconic “Come together” by the Beatles, that has been recorded also by Aerosmith, Godsmack, and Michael Jackson.