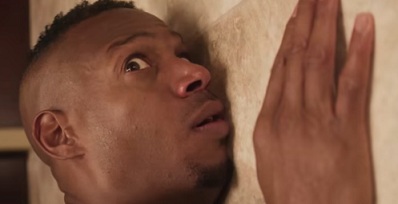 Netflix has released a teaser trailer for its upcoming original comedy film Naked, slated to launch on August 11.

The film, directed by Michael Tiddes, revolves around Rob, a charming man-child who, the night before his wedding,
doesn’t have his vows written, doesn’t know the steps for the first dance, and doesn’t have the ring. Despite all these, he decides to go out with his best man, and something unexpected and explainable happens: the next morning he wakes up naked in an elevator, with only one hour to get to the church. This hour is full of obstacles that he must overcome in order to not miss his own wedding. But here comes the twist: before getting married, he is forced to live this hour over and over again until he finally grows up and becomes the man his fiancee needs.

The teaser features Wayans’s character waking up naked in an elevator several times, screaming in despair and having, each time, different approaches in regard to the ones waiting for the elevator.